Shake of that Rust with PESP

You are here:
Home
Success Stories
Shake of that Rust with PESP 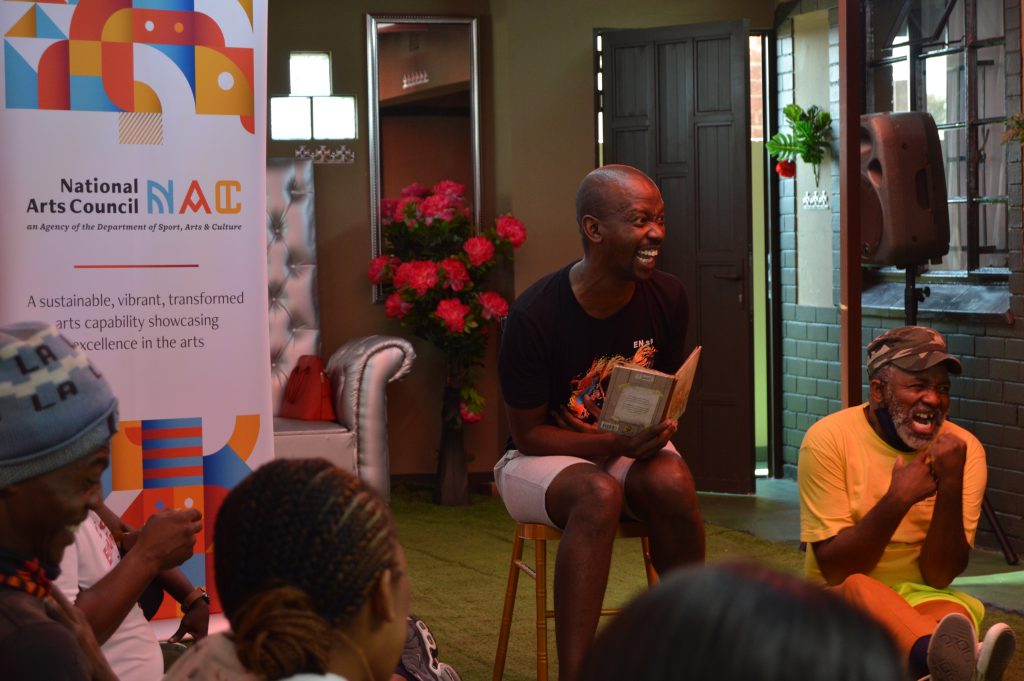 Shake off that rust workshop

On the 6th of March, an NAC PESP-funded initiative called Shake Off That Rust took place in the East of Gauteng, in the township of Katlehong. Shake Off That Rust is a drama and performance workshop aimed at helping actors shake off the rust gathered during the period of COVID-19.

Created by Phakamani Zikalala, this workshop prioritises creating job opportunities for local theatre/television practitioners, while creating a very strong theatre development and foundation for the participants. These participants comprise various levels of expertise in drama and performance. Professional actors were invited to hold the sessions to ensure holistic training of very high quality and this, in return, will sharpen the attendees for the high demand of the industry.

The list of facilitators comprised of a seasoned A-list of drama and performance practitioners in South Africa, including:

Keamogetswe Ngubeni has always loved the idea of being an actress and performing. While studying at Oakfields College for Performing Arts, she did not only aim to improve her skills, but she wanted to create a platform where individuals can come out freely and speak about their dreams and passions. Kea decided to take the next step in furthering her love of performance and co-directed and choreographed little kids from Hatfield Christian Church Academy for their end year production.

Her love grew whilst working with children and she has never looked back. She believes that unicorns exist and they are in every little kid, because they are magical little beings that need a platform to sparkle.

Diana Maseko has been in leading roles in the 2011 production Spirits and Bones as well as in Seipati, produced in 2010.

Buntu Tembani is a South African storyteller, actor, praise poet and Fitness instructor. Buntu also uses drama and performance in the fitness space with The Zone Fitness, Gym Co.EDCON and Anglo. He is the founder of t.spinboot “cycle300” (fitness) and founder member of Lucabantu Productions cc. and has extensive experience in merging performance and drama with palliative care with the public health system.

Thulane Kubheka is a South African actor best known for his role as The Butcher of Soweto in the Mzansi Magic miniseries 4 Hours produced in 2014. Other television series he has acted in include eKasi: Our Stories, Zone 14, 90 Plein Street, This Life, Backstage and Isidingo. He was also a community radio presenter on Kasi FM. In 2016, he appeared on the Mzansi Magic telenovela Greed & Desire.

Thabo Monareng is a seasoned performance and drama practitioner who specialises in stage production and childhood development throughout the marginalised community of Soweto. He is currently completing the production of the Saints Play, written by Legwale Maswabi.

The Shake Off That Rust Programme ensures that participants get the best knowledge from those practitioners that have actually experienced a fruitful career.

The fact that participants receive their training from seasoned actors ensures that they are in turn moulded and sharpened for the high demand of the industry.

The workshop looked at assisting about 180 theatre practitioners (15 per session) in the period of twelve Saturdays. However, budget constraints as a result of the changing guiding figures for PESP, have resulted in the program being
shortened. Despite having a limited budget, a little under 200 participants were workshopped. Shake Off The Rust is progressively moving forward to find other funders both locally and internationally to ensure a long-lasting legacy in maintaining the culture of theatre and its functionality in the region and society at large.

See our YouTube page to see how Shake of That Rust made PESP work. Click here to watch.

Everyone would agree that when we think about opera music, we tend to picture massive

Nomsa Manaka is a well-known Soweto-born dancer, choreographer and actress who runs The Nomsa Manaka