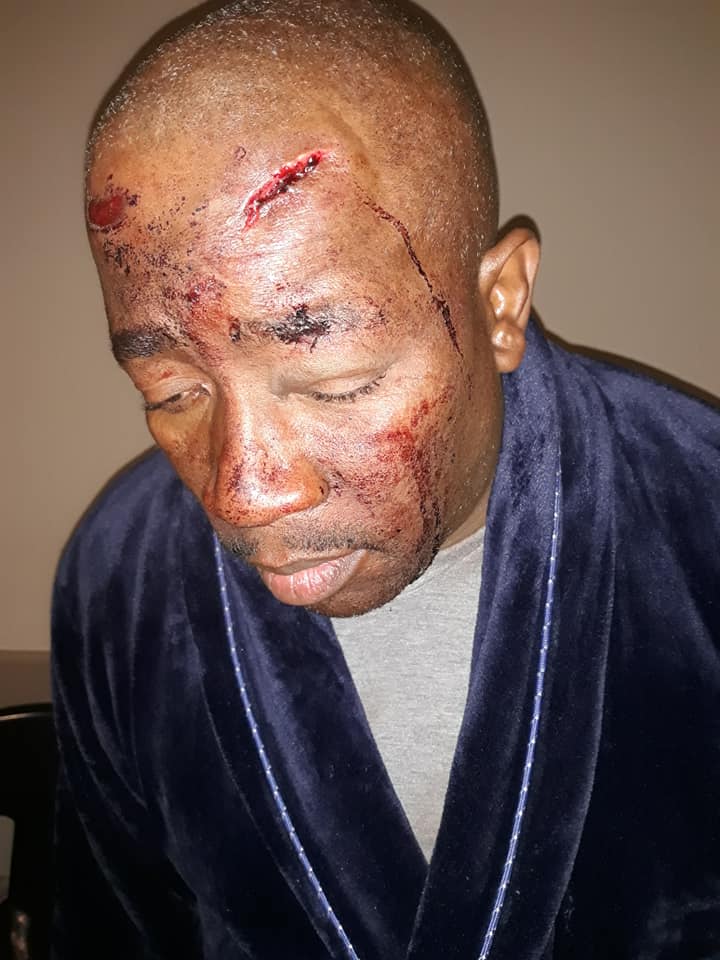 National Arts Council Chairperson and prominent lawyer, Hartley Sandy Ngoato was severely assaulted and verbally abused by white Hartbeespoort residents in what a witness describes as a racially motivated incident at the Oewer Klub Resort on the shores of the Hartbeespoort Dam in the North West Province of South Africa.

According to Thembelani Mpakati, a candidate attorney at Ngoato Attorneys, who was with Ngoato on Sunday, Ngoato was physically and verbally attacked by a mob of white men, led by a Tiaan Ebersohn, as he (Ngoato) was reversing his bakkie to hook his boat which he had taken out onto the dam with a group of friends.

“Mr. Ngoato invited me to join him and his group of friends for a boat ride after I had dropped off some legal documents at his house in Hartbeespoort. After an afternoon well spent cruising around the Dam, we returned to the Schoemansville Oewer Klub where Mr. Ngoato had launched the boat earlier. I jumped off the boat with Mr. Ngoato to go and assist him to reverse his bakkie which had a boat trailer hooked at the back. As Mr. Ngoato was reversing, a white man who had spent the afternoon picnicking at the Oewer Klub approached the driver’s side of Mr. Ngoato’s bakkie and banged on the door. Unable to open the window as it had an electric fault. Mr. Ngoato opened the door to enquire what the problem was. Before Mr. Ngoato could even speak, Ebersohn started shouting at him and asked Mr. Ngoato what he thought he was doing. From what I could hear, Ebersohn was accusing Mr. Ngoato of speeding, something which was highly impossible taking into consideration the limited space available to speed from where Mr. Ngoato had parked his bakkie and where his boat would be hooked.

“Ebersohn clearly and loudly kept shouting “F**k these blacks!! They must go away!”. In no time, three or four other burly white men had approached Mr. Ngoato’s bakkie and were encouraging Ebersohn on. The entire situation was very heated and soon became aggressive. Mr. Ngoato kept asking them what exactly he had done wrong to rile them up so aggressively but none of the men gave him a coherent answer.

“Out of the blue, Ebersohn pushed Mr. Ngoato onto the ground and started beating him up. Ebersohn continuously smashed Mr. Ngoato’s head against the concrete ground. None of the other white men did anything to stop Ebersohn at that time. Instead they allowed the physical attack to continue and blocked me from going to assist Mr. Ngoato.

“Mr. Ngoato eventually managed to stand up and reached into his bakkie. He brought out a spanner and threatened to attack them in self defense and it was only then that Ebersohn and his crew drew back,” said Mpakati.

During the attack, Ngoato sustained a severe laceration to the head and sustained bruises and cuts to his face as a result of having his face pummelled into the concrete ground. His left leg was scared, right hand swollen, and face completely bruised.

Asked if Ngoato had provoked the mob in any way before the attack, Mpakati said Ngoato had not spoken to anyone but had proceeded directly to his bakkie after disembarking from his boat. Mpakati reiterated that there was no reason fathomable for the attack besides racism. Mpakati further reported that even after the police had arrived on the scene, Ngoato’s assailants refused to be driven to the police station by black police officers. When the black policemen arrived the mob of white people gathered there could be heard saying that they will be calling the white police station commander on his cell phone. It has since come to our attention that Ebersohn was moved from a normal holding cell to a more “comfortable” one.

The attack on Ngoato comes at a time when racial tensions in Hartbeespoort are at a peak following vehement opposition by the predominant white Afrikaner community to applications for state leasing by black people seeking leases to conduct business on state land along the shores of the Hartbeespoort Dam. Mr. Ngoato is one of the black local businesspeople currently scouting for available state land for lease upon which he wishes to expand his businesses.

Just three days prior to the racial attack on Ngoato, the local community newspaper, The Kormorant, which serves the interests of the majority white Afrikaners in the area, published a full page apology to black-owned Mathibedi OTN Holdings in compliance with a ruling by the Press Ombudsman following their publication of unsubstantiated and biased reporting regarding Mr. Thabiso and Mrs. Onicca Mathibedi’s occupation of state owned land on the shores of the Dam. The portion of land occupied by the Mathibedi’s lies adjacent to the Oewer Klub where Ngoato was attacked on Sunday. The Mathibedi’s are the first black people to be given permission to occupy state land on the eastern foreshore of the Dam by the Department of Water and Sanitation (the custodians of state land around the Dam).

The publication of the apology was the result of resistance encountered by the Mathibedi’s from members of the white community who issued death threats, racial slurs, and other forms of victimisation towards the couple after The Kormorant published a series of damaging articles without seeking any comment from the Mathibedis about their arrangement with the DWS. The Kormorant similarly failed to ask questions about the nature and type of facilities the Mathibedi’s were developing.

Following the publication of the apology, the fence in front of the Mathibedis portion of land was plastered with posters by unknown persons who mounted them over the weekend. The posters questioned the occupation of land by the Mathibedis and the role of DWS. In March 2018 when the Mathibedis occupied their land a protest march was mounted from the Oewer Club with placards and it proceeded to the Mathibed land.

On the same Sunday that Ngoato was attacked, certain members of the white community held a meeting at the Oewer Klub to discuss ways of raising money for a legal process designed to evict Mathibedi OTN Holdings from the land. It is suspected that Ebersohn was amongst the community members who attended the meeting.

This incident is not the first time that Ngoato has been racially attacked by white members of the Hartbeespoort community. Earlier this year his neighbour pulled a gun on him over a minor incident and used racial slurs during the altercation.

Ngoato is a prominent and active member of the Hartbeespoort community who has been at the forefront of bringing about racial equality in the tourist town. He currently owns and runs a lodge in Schoemansville, a suburb in Hartbeespoort which sits on the shores of the Dam. He was the only black member of the Hartbeespoort Dam Rehabilitation Steering Committee. During the 2016 Municipal elections, Ngoato ran for the position of ANC Councillor in Hartbeespoort. A few years ago Ngoato represented the former principal of the local primary school (General Hendrick Schoeman Laerskool) whose efforts to introduce dual medium classes in English and Afrikaans at the school were opposed by the schools governing body. The progressive principal was subsequently kicked out of the school and today the school remains an Afrikaans medium school.