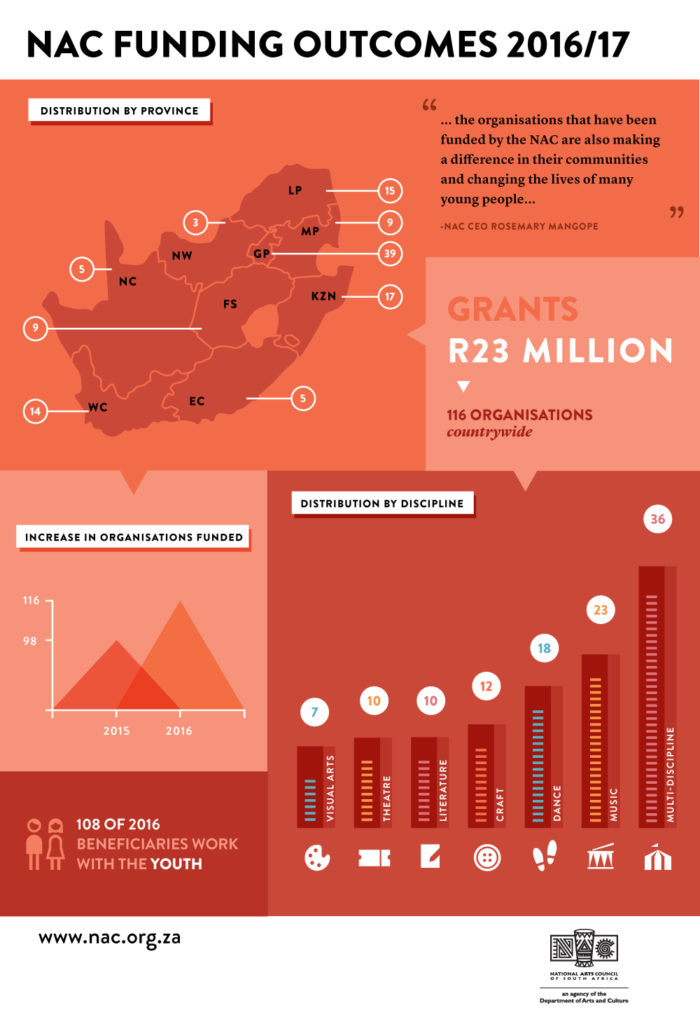 The National Arts Council (NAC) of South Africa has awarded R23 million in grants to 116 organisations countrywide who will receive funding for the next three years in various arts disciplines. This is an increase from the last funding cycle where 98 organisations received three year funding.

To support the strategic initiative of promoting equity in th arts, encouraging to note that 108 of these beneficiaries work with the youth and 50 projects that received funding are steered by women.

The provincial allocation followed the usual trend with Gauteng leading in the number of funded projects (39), followed by KwaZulu Natal (17), Limpopo (15) and the Western Cape (14). Freestate and Mpumalanga both had 9 funded projects; Eastern Cape and Northern Cape each had 5 and the North West with 3.

A call for proposals for the three year funding cycle for arts organisation support opened in November last year with the arts community required to submit business plans outlining their artistic programmes and budgets for a three year period from 2016 to 2018. This was the fifth time the NAC has requested funding proposals for this funding category. Nearly 500 applications had been received when submissions closed at the end of January.

The NAC Beneficiary Profile is a developementally oriented system that aims to redress and transform the sector. It guides the funding process in meeting the objectives of the NAC. Furthermore it guides the budgent allocation to the various life cycle stages of organisations. The Profile identified three (3) life cycle stages of organisations and the kind of support to be offered as follows; Foundation Phase (20%) for emerging individuals and organisations (0-5 years, Intermediary Phase (30%) for intermediate or mid-carre artist and organistaions (5- 10 years) and the Established Phase (50%) for established artists and organisations (10 and more ermaked for shorter term funding)

Says Rosemary Mangope, CEO of the NAC: “As we celebrate the central role played by South African women during the month of August, the NAC’s focus on empowering and upskilling women across all arts fields continues. Central to our mandate is the importance of facilitating strong leadership roles for women of all ages within the creative industries, where their voices continue to be under-represented. We are proud of the progress we have made in this important sector to date and the NAC will continue to work towards empowering the current and next generation of women during Women’s Month and throughout the year, not just in SA but on the African continent and worldwide.”