Taking it One Step at a time

You are here:
Home
Artisan Posts
Taking it One Step at a time 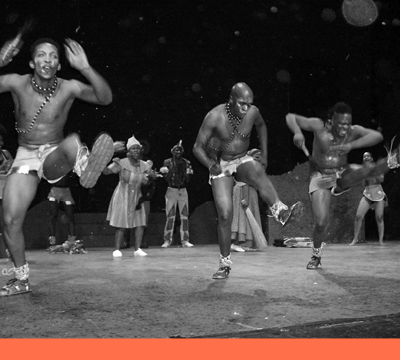 Imagine a young man’s journey from his roots in a rural village to the sprawling township of Mamelodi near Pretoria. He is in search of wealth, love and connection, and for the first time in his life, he makes contact with people of other races, cultures, traditions and languages.

He is simply amazed by the ability of these seemingly different people to work together. Through his discovery of the rich and diverse tapestry that makes up South African society, the young man is taken on a beautiful, and at times challenging, journey of self-discovery.

This coming-of-age story is called Umshado – Marriage of Heritage, and is written and directed by the multitalented Bogosi Bolokwe, who is also the director of One Step Productions, the company responsible for the creation of Umshado. The National Arts Council (NAC) has been involved in the production since inception in 2013 through grant funding, and is proud to be continuing its support. NAC funding, according to Bolokwe, assisted the company in the development of young singers and musicians “to expose the hidden talent of artists from disadvantaged communities” in Rustenburg, North West.

Bolokwe says the aim of his company and the play itself is to “preserve and educate about African values, and ensure that the historical traditions are honoured”. Bolokwe continues: “Self-hate is evident among Black South Africans, as most of them don’t appreciate their culture and heritage, especially in urban areas. The West is more attractive to them; they do not realise that we can rise to those heights of excellence.”

It is for this reason, according to Bolokwe, traditions and customs should be regarded in the highest esteem, as they form part of our cultural heritage. “We should all stand up and applaud when men and women dedicate their lives to the preservation of our heritage,” he says. But in a globalised world, where a strong Western influence has somewhat overshadowed appreciation for our heritage, it becomes difficult to maintain, preserve and honour our heritage; and this, according to Bolokwe, begins with understanding the value of the family unit.

“The family institution is one of the things that is constantly under attack and devalued. The institution of marriage is no longer seen as strong, particularly among the younger generation. It is within families that good values and traditions are passed to the young ones. It is within families that love for good education and success is imparted to children. Marriage should inspire more young people to embrace the noble institution of families,” says Bolokwe passionately.

Not only does Umshado carry with it a strong message of unity and tolerance, the production plays its part in job creation, having already created employment for 40 people, mostly youth. One Step Productions also engages effectively with various global arts producers, who, according to Bolokwe, have shown interest by investing in productions of this genre. “Our focus is mainly long-term – to run this production abroad and locally to alleviate poverty and to promote the arts associated with our culture for economic empowerment,” says Bolokwe.

Umshado, therefore, could be seen as a cultural beacon to follow towards rediscovering our culture and heritage, and celebrating our rich diversity. After riveting performances at the Performing Arts Centre of the Free State in Bloemfontein in October last year, the critically acclaimed play will be back to dazzle theatre lovers, this time at the State Theatre in Pretoria from 16-26 November.

So, like Umshado’s protagonist, fall in love this summer with your heritage, your culture and, most importantly, yourself; and revel in the treasures of our heritage.