You are here:
Home
Artisan Posts
Strokes of genius 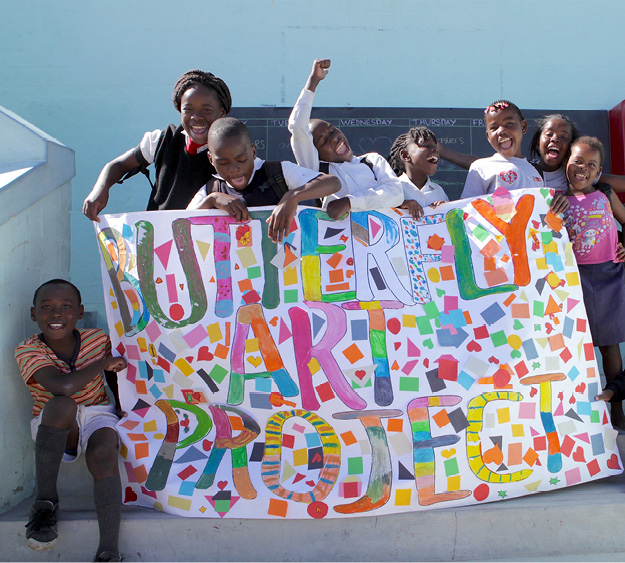 About 20km out of the Cape Town CBD, nestled between Grassy Park and Muizenberg, is the community of Vrygrond – the side of the city that you won’t see on picture-perfect postcards. It’s a place where gangs rule and drug abuse is rife; where health care comprises little more than a plaster and a Panado, and children are often left with no option but to be the heads of households.
Strokes of genius

But there’s been some colour of late against the grey, depressing backdrop that is Vrygrond. The Butterfly Art Project, which, as its web portal explains, aims to change the face of Vrygrond by “encouraging creativity and healing through art … one brush stroke at a time”. The safe, nurturing environment the project creates is a far cry from most of its participants’ harsh realities. The project was started because its founders “believe art is a medium that promotes healing and gives skills for creativity in all of life”.

Traumatised children often have greater difficulty reaching their potential, but the project “encourages them to express themselves through mediums of colour, independent thinking, creativity, and simply providing a positive space for them to adapt and take back home”. It aims to expand each of its members’ capabilities to learn, and create a positive influence by broadening their horizons of experience and creative or independent thinking.

The project however, isn’t limited to children. It’s open to anybody who wants to join. “We also run a ceramics and pottery class for unemployed members of the community. They are then given the opportunity to sell the ceramics they make at our end-of-year exhibitions,” says Zaid Philander, the project’s arts outreach manager.

Philander’s role in the project is to facilitate access to the arts for the community by setting up classes. “My biggest highlight is seeing the progression of each child and adult at the end of the year, not just in terms of skill and art techniques, but seeing them grow into confident, creative and inspired individuals who learn to know more than just the township that they reside in. It’s very fulfilling to see someone who thought there wasn’t much more to life learn to be creative, and use that to explore themselves and further themselves as individuals,” he says.

Founder Angela Katschke started the project in late 2010. For a while, she ran it from the boot of her car. But her brainchild has come a long way since then. Today, the Butterfly Art Project has as many as 750 beneficiaries per week, according to Philander. And there are plans to expand. “We plan on expanding the community in creative output programmes that they can use and adapt as a skill that can become an entrepreneurial venture. For example, we have started rolling out sewing and gardening programmes. We have also started a street art course for younger members of the community that could help them understand the difference between vandalism and art, and also match their creative output with their freedom of expression,” he explains.

Are we about to see graffiti in Cape Town becoming more refined, expressionistic even? Possibly, but what’s clear is that this project doesn’t only provide an artistic outlet for members of a neglected community. It builds them into “strong, resilient and passionate beings”, according to Philander, and gives them the safe space they need to grow and heal in an otherwise turbulent world. And there’s little doubt that Vrygrond, like many of South Africa’s more marginalised communities, could do with some healing.