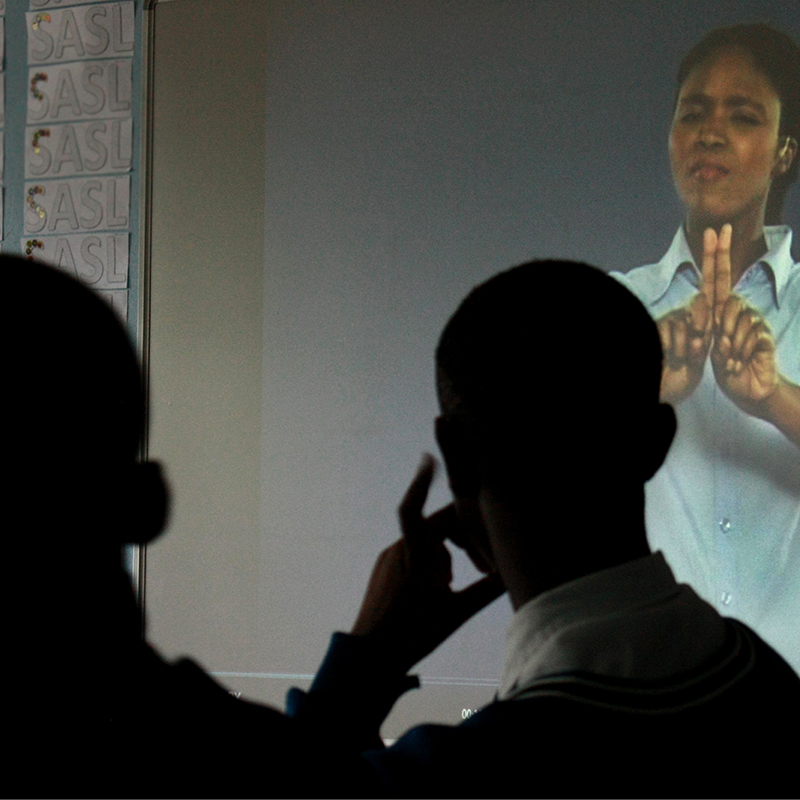 And while the mainstream arts scene is increasingly growing – it often fails to extend to one important, but often forgotten group – South Africa’s deaf community. Often unconsidered in policy-making, interpreters are often the only visible point of contact with the deaf. After all, who can forget the huge controversy following the fake interpreter Thamsanqa Jantjie. But there are strides being made towards greater accessibility.

Sign Language Education and Development (SLED), a local organisation eagerly supported by the National Arts Council, is turning the tide in this area. They are achieving this by creating a rich collection of works in South African Sign Language, to make sure that the history and heritage of South Africa is accessible to the deaf community, in a way which allows it to be transferred from generation to generation.

SLED is not only concerned with issues of heritage. Indeed, their primary aim centres around the education of deaf children, and their stated mission is to “facilitate the deaf child’s equal and democratic right to literacy and learning through the promotion of South African Sign Language.” Considering the challenged state of South Africa’s basic education system, and the sparse number of teachers qualified to teach deaf children, SLED is one of the few organisations which undertake projects to address this. Regularly involved in drawing communities into their initiatives, the support of donations and funders like the National Arts Council play a crucial role in making sure they can continue their work.
But the complexities go beyond just rands and cents. It’s about making South African Sign Language into a living, breathing language, with a history and future. Unlike the case in other countries where sign language has been codified in written form, South African Sign Language still lacks formal documentation.

As a result, over time, much of South African Sign Language (SASL) has been transmitted through face-to-face communication – which, although useful, limits the possibility of widespread dissemination. This means that a long history of poems, plays, songs in different versions of SASL remain lost to this generation of deaf people.

As early as 2001, SLED identified this issue and started to develop materials which directly speak to issues of culture and heritage. The deaf community, like the hearing one, have ideas and artistic talents, and SLED’s initiatives give them a space to share these with the rest of the community. In 2009, SLED held an eight day storytelling workshop, which in addition to discussing the challenges, also crafted new documents, videos and other resources which can be used and shared widely.

This included a set of stories, poetry, stories from the participants themselves, and other works which were compiled into a DVD. It was important for the project to produce a variety of genres, in order to make sure that deaf learners (and families and caregivers) had access to the same diversity and range of content that the hearing community is exposed to. However, deaf learners do live in a hearing world, and English literacy remains an important skill, and an anthology of the works was made available in 2011.

SLED has recognised the significance of a dynamic education – and the place of cultural knowledge in parallel with academic knowledge. Through the continued support of bodies like the National Arts Council, fellow organisations such as DeafSA, and ordinary people invested in the projects, they make a remarkable contribution to the lives of South Africa’s deaf community.

* Sign Language Education and Development is an NAC flagship project. The organisation’s objective is to see all South Africa’s Deaf children achieving their full potential through the understanding and use of South African Sign Language (SASL). The underlying purpose is to enable all Deaf children to participate equally and fully in education, society and employment, embracing their democratic rights. To this end, SLED focuses artistically on signed SASL stories, poems, richly illustrated reading and teaching materials to communicate learning, culture and history. SLED’s Deaf artists in the form of illustrators, poets and storytellers, work alongside linguists to create dynamic and effective educational material.

SLED has been awarded funding to develop a wide range of signed SASL literature for Deaf learners, including educational materials in signed poetry, children’s stories in SASL and in print, historical and contemporary biographies, descriptive narratives and SASL non-fiction. The process will involve research to identify Deaf poets, artists and narrators before creating these unique Deaf community resources.