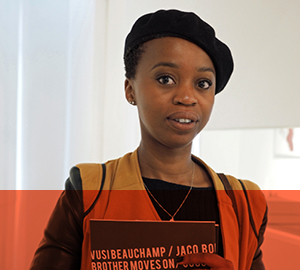 At 33, Same Mdluli has achieved what most people only dream of achieving in a lifetime. This dynamic, bold and fiercely intelligent young woman is in the process of blazing trails for young artists and presenting them with opportunities that previously did not exist.
Profile: Same Mdluli, taking the art world by storm

Born and partly raised in Botswana, Mdluli and her family went into exile in the United States during apartheid. They returned to Botswana in 1994, and in 1996 moved back to South Africa, where she matriculated from the National School of the Arts in Johannesburg in 2001. From there, Mdluli went on to study fine art at the University of Johannesburg. “I then did a Master of Arts in Arts and Culture Management at Wits until 2010. Thereafter, I enrolled for a PhD, which I completed last year,” she says.

Mdluli’s doctoral thesis, for which she received funding from the National Arts Council (NAC), focuses on “so-called rural artists and the way in which they were featured and received in the (white) art market during a particular period”, and attempts to interrogate why these artists have, according to her, since “disappeared from view”. As a result, she says, there has been very little research done on these artists and their individual artistic repertoires.

“My hope is that my research will encourage other scholars to start engaging in further research about these artists and other black artists in general. The South African art historical landscape has not paid much attention to many of these artists,” she says.

She pins down her motivation for her PhD reading in art history as partly political and partly personal, in that she has “always felt that there is a misconception that art is reserved for a selected few and therefore elitist”. She adds: “In a sense I wanted to challenge this misconception but it also became a means to better myself through education.”

Mdluli, who started drawing from an early age because she enjoyed the quiet time and space it offered her, was appointed as a member of the NAC’s Visual Arts panel in 2014. The role of the panel is to assess and recommend funding fairly and appropriately to projects, as well as to award bursaries to artists who would contribute positively to the overall visual arts and cultural landscape.

“My role on the panel, like the other three panellists, is to give some advice on why certain projects and bursaries are important to support. I’ve been studying art since high school and have worked in the industry for about 10 years. This has equipped me with the skills and insight to offer advice on both the historical and current contemporary landscape of visual arts, both locally and internationally,” says Mdluli.

She has recently started up Sosesame Gallery in Melville, Johannesburg, which opened with its first exhibition in late April. On describing the reasons behind establishing the gallery, Mdluli says: “One of the challenges young artists face is the lack of professional spaces to showcase their work and talent. This means they do not have the means to make a sustainable living from their craft and skills.

“The gallery comes at a time when we are all having to rethink many social, economic and political issues. It is thus an initiative that is an attempt to address some of these issues by providing a space where young (and older) artists can present their work.”

Sosesame Gallery, according to Mdluli, is run with the sensibilities of a cooperative. She serves as the curatorial director along with her three partners, who serve in other roles. “At the moment, we are trying to attract as many dynamic young and more established artists as possible mainly because we would like to steer the curatorial focus modeled around a mentorship programme. We found that this was one of the successful aspects of the first exhibition we put together, where painter Johannes Phokela, for example, mentored two of the artists participating.”

In the coming years, the gallery aims to acquire adequate funding so it can extend its scope in showcasing diverse artistic mediums. “The extension to other mediums such as video or installation work will all depend on the feasibility and resources the gallery is able to generate,” says Mdluli.

Having already done so much, there’s no doubt this star of South African arts and culture will only shine brighter in the years to come.

Catch the Otherwise Group Exhibition at the Sosesame Gallery from now until 02 June 2016. For more information please visit http://www.sosesamegallery.co.za