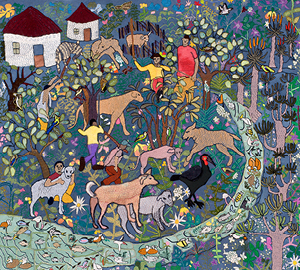 What began in 2000 as the Keiskamma Art Project to raise the self-esteem of and provide income for women in the villages of Hamburg, Ntilini and Bodiam in Eastern Cape quickly mushroomed into a largescale multidisciplinary organisation that has expanded from just art to other programmes that cater to the needs of the local communities through providing an income from their artistic pursuit, as well as a platform to showcase their endeavours.
Keiskamma Trust

When the project reached numbers of more than 100, it began to make large-scale art works telling the story of South African communities in conflict, managing the Aids epidemic, and other themes relevant to life in a rural community in the 21st century. In 2006, the Music Academy was founded, which worked both separately from the Art Project and in collaboration with it in productions. The independent but collaborative model proved to be very successful, enabling the organisation to develop themes and a recognisable brand.

Soon after, the Creative Development Programme was launched and worked within the same themes, teaching children music, drama and visual art with a therapeutic KEISKAMMA TRUST approach. The organisation’s work aims to use creativity in the community for healing and income generation.

The project has been involved with NAC since 2008. In 2013, it produced the Keiskamma Carnival, a musical arrangement performed at the National Arts Festival, which was funded by the NAC. It also performed for the community in the nearby township of Fingo, and its relationship with this community still continues, with the Music Academy performing there again in July 2016.

The Art Project made puppets from felt and wire for the show, and a group of unemployed youth were trained to recite locally produced poetry and storytelling around the theme of birds. They acted out scenes using masks and puppets. The funding the project received from the NAC allowed many different groups to participate in this innovative endeavour.

In 2015/16, the Keiskamma Art Project, Music Academy and Creative Development programmes received flagship funding to take performances to the National Arts Festival. The drama group produced a play with director Mojalefa Koyana, accompanied by music produced by the Music Academy, with puppets and sets made by Keiskamma Art Project’s visual artists.

The production was named Indalo, meaning “nature” in isiXhosa. With this funding, it was again able to involve the local youth in a drama production, and take the Music Academy to Grahamstown and Cape Town to perform in various festivals.

The participants were able to learn more about stagecraft and performances, and showcase their work. The art project produced a book after many workshops of storytelling and collecting traditional beliefs of the Xhosa people about birds. There has been great demand for the book, which will be used as reading material for young isiXhosa speakers.

The Art Project produced the Instikisi Tapestries – a set of six embroideries that highlighted the plight of the intsikisi, the ground hornbill. These tapestries have since travelled widely since to awareness about the traditional hunting of the bird.

The involvement of unemployed youth has enabled the Keiskamma Trust to reach out to young people, and has made communities aware of the value of their traditional stories and language. The Art Project has employed many people, and provided local artists with an income; and excellence in music education has been proved a creative means of instilling a sense of self-esteem, perseverance and discipline. The opportunities created by the NAC have no doubt created long-term benefits in the lives of the young artists, musicians and performers.

Adequate funding creates the potential for the organisation to enlarge its reach, improve its work, and employ more skilled people to invest in local communities. Although the organisation generates income for its projects through the sale of artworks and concert tickets, it still largely depends upon funding, and the contributions of the NAC have allowed it to make huge progress in several multidisciplinary productions.

PrevPreviousNew leadership on board at the National Arts Council
NextIndustry commentsNext