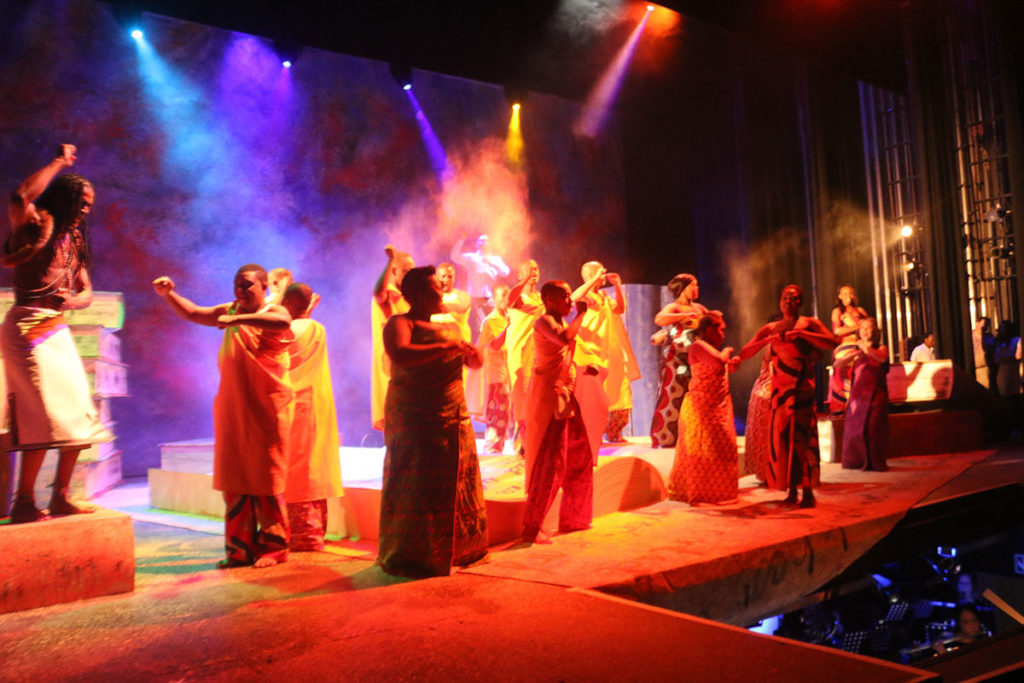 Established in 1999 as Black Tie Ensemble, Gauteng Opera is an all-round performing arts and entertainment company, specialising in opera productions, concerts and events that are driven by excellence in vocal performance and theatre.

The company prides itself on being one of the foremost nurturers of experts and proponents for quality vocal performance and theatre practitioners. This is achieved through work opportunities for trained singers and training young South Africans with singing talent. Gauteng Opera also introduces young people who are interested in theatre to the discipline by employing them as interns to develop their skills in theatre management.

Through the years, Gauteng Opera has benefited financially from the NAC by receiving company funding, which has kept administration sustainable. Gauteng Opera also receives project funding that benefits South African singers, choristers, orchestra musicians, conductors, directors and designers, thereby securing a sustainable artistic workforce and contributing to the development of the arts in South Africa as a whole.

From 2013 onwards, Black Tie Ensemble was renamed Gauteng Opera. However, the Black Tie Ensemble Trust is still in existence. Funding from the NAC was first received in 2005 for a production titled A Tribute to Mario Lanza. For the period under review, project funding received from the NAC assisted in part for the launch of the Cula Mzansi project, comprising three short operas written by South African composers using South African stories for inspiration. Four performances of these short operas were presented at the Soweto Theatre in August 2015, with one of the performances taking place on Women’s Day (9 August).

Words from a Broken String, composed by Peter Klatzow, featured libretto by Michael Williams and was directed by Marcus Desando. Soloists included Natalie Dickson-Bath, Njabulo Mthimkhulu, Phenye Modiane, Kagiso Boroko, Thamsanqa Khaba and Sibusiso Shandu. These artists came together to tell the story of Lucy Lloyd, a 19th-century linguist who fostered a relationship with San convicts brought to work in her garden under the disapproving eye of her community and authorities.

Tronkvoël, a chamber opera composed by Martin Watt, featured Afrikaans libretto by Alwyn Roux and was directed by Tshepo Ratona. This short opera featured Sibusiso Shandu, Coert Grobbelaar, Kagiso Boroko and Elizabeth Lombard, and is set against the backdrop of 1970s apartheid South Africa at Pretoria’s notorious C-Max prison. Writer and poet Breyten Breytenbach was imprisoned there for two years for high treason, just metres away from the gallows. It is here, in the shadow of death, that the images conjured from the grotesque sounds of suffering come to haunt him.

Hani, composed by Bongani Ndodana-Breen, featured libretto by Mfundi Vundla and was directed by Warona Seane. Soloists included Njabulo Mthimkhulu, Khumbuzile Dlamini and Phenye Modiane. The opera depicts assassinated SACP leader Chris Hani as an embodiment of all those who lost their lives fighting injustice. It is set in the dead of night in the study of the writer, who recalls an encounter with Hani and enters a dreamlike state, interacting with a soothsayer, a praise singer and a chorus of ancestors.

All three of these short operas were conducted by Graham Scott and the choreography was done by Thoko Sidiya, with set design and lighting by Wilhelm Disbergen.

Gauteng Opera is a recipient of three-year company and project funding from the NAC. In the new financial year, company funding will be used for the administration of Gauteng Opera, which includes renting offices in Ferreirasdorp, Johannesburg, as well as the salaries of five administrative staff members, security guards, a cleaner, four soloist artists and three trainees of the Gauteng Opera Academy, apart from the normal day-to-day costs required to maintain a healthy company.

Gauteng Opera has survived 17 years through tough economic times. It is through support from institutions such as the NAC that this important institution in the South African music, theatre and arts landscape has been able to survive, sustain itself and grow.