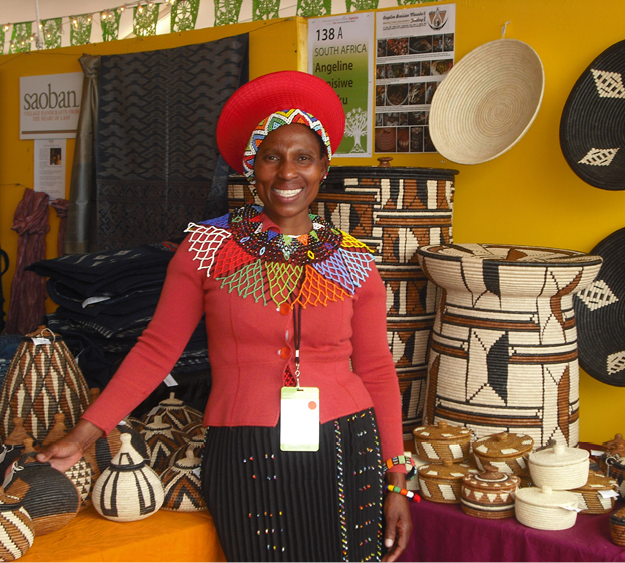 Since 2007, Angeline Bonisiwe Masuku has travelled to the United States to showcase the baskets she makes by hand at the Santa Fe International Folk Art Market, which aims to “celebrate and preserve living folk art traditions and create economic opportunities for and with folk artists worldwide”.

She shot to prominence when she received the FNB Vita Award for Craft in 2007, and since then has also exhibited at similar art fairs in Italy and New York.

Masuku was born and raised in Zululand’s Empembeni village, where she learnt the craft of basket weaving from her aunt at the tender age of eight. She soon passed the skill on to her sisters, then to her children, and then to the community, who were able to use their newfound skill to send their children to school and forge a path out of poverty. Now Masuku showcases the community’s basket-making ability to potential customers and art lovers from around the world, having exhibited at the International Folk Art Market again in 2016.

To make her famous baskets, Masuku gathers ukhasi grass and ilala palm, and then uses leaves and roots to create natural dyes before weaving the materials into baskets adorned in traditional colours and patterns. She designs her baskets to incorporate imagery of her immediate rural environment, as well as the geometric designs typical of Zulu beadwork. The large, beautiful baskets she produces bridge the divide between traditional craft and modern art.

It takes Masuku two months to weave one of her big baskets. One day, she hopes to have her own office with a computer and a car, and attend big craft fairs all over the world. As a craft practitioner from a rural area, Masuku is a shining example of how a modern crafter makes the transition to being a cultural entrepreneur – versatile and productive, with a keen sense for business.