Clowning around for a cause

You are here:
Home
Artisan Posts
Clowning around for a cause 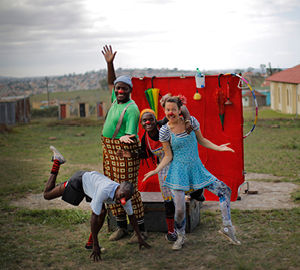 When a Spanish clown named Tortell Poltrona entered a refugee camp in the war-torn Balkans in the early 1990s to bring laughter to hundreds of distressed children, he noticed something first-hand that simply couldn’t be ignored – the healing power of laughter.

Poltrona went on to start Clowns Without Borders (CWB), an organisation that has ballooned across the world during the last two decades, with chapters across Western Europe, the US, South America and Southern Africa.

The South African chapter of CWB works predominantly in marginalised rural and urban communities in South Africa, as well as throughout sub-Saharan Africa, with a commitment to inspire laughter and emotional relief, and a “long-term intention to empower, train and provide support to artists from other developing countries so that they can develop local responses to emotional trauma”.

Established in 2007, CWB South Africa’s programmes include: 1) performance-based expeditions, where clowns are sent into areas of crisis to create an atmosphere of joy using nonverbal physical comedy, music, storytelling and dance, even if only to provide momentary relief; 2) family-based care and parenting programmes, which entails CWB working with community organisations to provide support to vulnerable children and families; 3) youth theatre empowerment, which uses theatre for the development and empowerment of vulnerable youth, focusing on addressing social issues; 4) local capacity development, which provides skills capacity training to community-based organisations and local arts groups; and 5) awareness raising through educational tours around issues regarding HIV/AIDS, gender based violence, poverty, and racism.

Jamie Lachman, the founder and executive director of CWB South Africa, says more than 380 000 children and adults have been reached in communities affected by crisis since CWB South Africa’s inception. “Our performances are nondidactic yet contain important messages about relevant social issues. These include HIV/AIDS, gender sensitivity, xenophobia, violence and abuse against children, hygiene and health, and poverty. They are also about creating a space to celebrate creativity, culture and community through the dynamic means of participatory theatre and clowning.”

Over the past six years, the National Arts Council (NAC) has supported CWB South Africa on a number of projects. The organisation currently receives funding from the NAC through the company funding initiative, which has enabled it to build capacity in order to reach greater numbers of beneficiaries, while also providing training and support to young South African artists who now work with CWB South Africa.

A recent highlight for CWB South Africa was its tour of communities around King William’s Town in Eastern Cape. The tour sought to increase access to the arts for rural communities while raising awareness about hygiene and water conservation, and was well-received by children and adults who attended, community leaders as well as educators. “The show was great, we really enjoyed it. I saw it in the morning and now had to come back for the second time. We learnt about the importance of water, how to save it and how we need to wash our bodies,” said one child who attended in Tshatshu.

Going forward, CWB South Africa intends to continue providing professional performances and arts interventions to marginalised children and families across the country, with the aim over the next three years to increase access to the arts, empower a new generation of young artists and facilitators, and continue to use the arts as a means for personal and social transformation. “We hope to be able to expand our relationship with the NAC, [in keeping with] its overall strategic objectives to develop programmes in support of youth development; and to develop programmes in support of audience development, participation and appreciation. We hope that our partnership with the NAC helps us continue to bring joy and laughter to areas wherever there is need,” says Lachman.