Celebrating our collective PAST

You are here:
Home
Artisan Posts
Celebrating our collective PAST 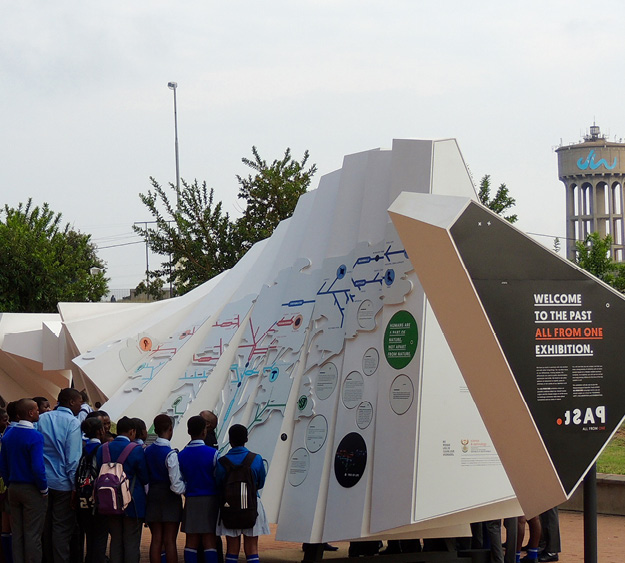 After recent outbursts on social media, the issue of racism was again placed on the forefront of the national agenda, with government and the national assembly taking a firm stance against it.
Celebrating our collective PAST

As a country, we seem to battle to shake the burden of our colonial history, which casts its shadow over the present, marring efforts to bring about social cohesion.

Now, more than ever, the arts offer many benefits for both individuals and society ranging from symbolically representing our lived realities, expressing our dreams and aspirations, to bringing individuals and communities together.

For cultural workers art offers the most important tool to communicate across audiences and differences, thereby bringing about social cohesion.

When the future of our much vaunted national miracle looks set to dim under such circumstances, it is our PAST – the Palaeontological Scientific Trust, that is – that provides us with a glimmer of much needed solidarity.

Promoting social cohesion is an important aspect of PAST’s mandate, and the All From One campaign is central in this pursuit. Launched on 10 November 2015, the campaign and accompanying exhibition celebrate Africa as the birthplace of humankind.

“The scientific fact is humans are 99.9% alike, with just a few genes making for the differences in skin colour” says Prof Robert Blumenschine, Chief Scientist at PAST. This is one of the scientific facts that was addressed in art-form in the All From One exhibition, where scientific data around humanity’s shared ancestry was transformed into works that are coherently accessible to a wider audience.

“When we use science as our guide, it is clear that the racial distinctions that began to appear only as recently as 50,000 years ago as our ancestors populated the world from the African homeland are superficial and have no bearing on our capabilities or character,” adds PAST CEO, Andrea Leenen.

The campaign is also supported by the Walking Tall Educational Theatre Project, an arts education initiative that harnesses the power of theatre to teach science. Aimed at learners and educators on a secondary school level, workshops feature a physical theatre production that illustrates how life on Earth evolved from the beginning of time to the present day, inspiring learners to realise, contemplate and treasure their age-old African origins.

The All From One exhibition moved to the Soweto Theatre in February 2016 as part of the Zindala Zombili African Music and Dance Festival – South Africa’s premier indigenous cultural festival. The NAC is a key partner for the Soweto leg of the exhibition and a strategic supporter of initiatives like PAST’s Walking Tall Educational Theatre Project, which staged a performance at the opening event. Since 2002, Walking Tall’s mobile, cost-effective model has enabled it to reach over one million learners and educators in South Africa, as well as audiences as far afield as Namibia, Kenya, Uganda, Tanzania, Belgium and Sweden.

Mandated to foster the expression of a national identity and consciousness by means of the arts, the NAC has appointed PAST as its institutional partner for social cohesion – a union that also strengthens its ability to promote and facilitate national and international liaison between individuals and institutions in respect of the arts. The NAC will help to fund the Walking Tall Educational Theatre Project future arts education initiatives in association with the All From One exhibition.

PAST, the Palaeontological Scientific Trust, is a Johannesburg-based public benefit organisation whose mission is to protect, preserve and promote the scientific evidence for humanity’s shared origins in Africa. By bringing together scientists, academics and education professionals with government and private enterprise, the organisation aims to inspire scientific curiosity, develop African leadership in science and instill pride in the continent’s ancient heritage.

PrevPreviousA Word from the CEO – Partnerships and collaboration are a key focus for 2016
NextNAC Flagship project profile: Madi a ThavhaNext